Uexküll's “Umwelt (Environment World)" built the theory of subjectivity that underlies organisms, and Gibson deepened the understanding of human beings from a psychological viewpoint. It was a Russian physiologist Nikolai Bernstein who studied these in more detail from the aspect of movement. *1

Human physical ability comprises four concepts: strength, speed, endurance, and skillfulness. As Bernstein pointed out, “skillfulness” is a control function, and the co-operation of the freedom degree of the organism’s body plays the greatest role in realizing skillfulness.*2

*1: Nikolai Bernstein was a Russian physiologist (1896-1966). He was known as an advocate of "co-ordination training", one of the training methods to increase the athletic ability. He was opposed to Pavlov's reflection theory, and was chased out of his profession by the Stalin administration. His major seven essays that he wrote in the 1940s were summarized as his representative book, Dexterity and Its Development (Resources for Ecological Psychology). However, the manuscript was not published during his lifetime for political reasons. It took twenty years after his death that the manuscript was found by chance at the attic of a research facility. It was published and translated into English, and then published in Japanese in the 21st century.

*2: "Skillfulness is the accumulation of action and experience in life. For this reason, skillfulness often improves as we get older and is retained for a much longer time than other psychophysical abilities. And just like any other psychological abilities, skillfulness has its own features." (Quoted from Dexterity and Its Development by Bernstein)

★If you interested in this text, please have the following ebook at hand. For that, Click on the URL below.

★This article is a piece of "knowledge card" that makes up iCardbook, IAI meets Philosophy: how to design the Game AI (Yoichiro Miyake). 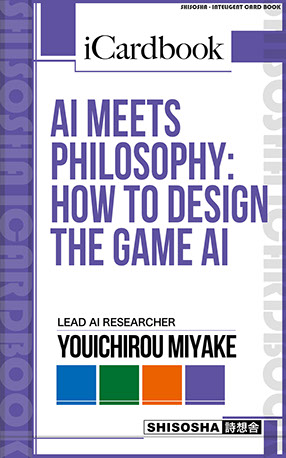 iCardbook, a card-type specialized book that organizes “Knowledge Cards” is a new form of book in the smartphone age.

■iCardbook Benefits:Good value for reading
・you can read it quickly in your pocket of time, e.g. commuting
・You can immediately understand the "drawing " in the author's head
・Amazon Prime members can read for free

■References list of "AI meets Philosophy: how to design the Game AI"